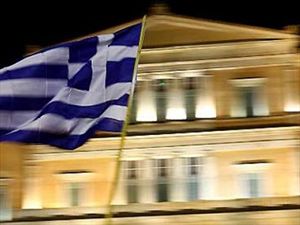 by the EDITORIAL BOARD

Greece and its financial overseers agreed on terms for continued bailout payments on Monday. The agreement is cause for relief — without it Greece would go bankrupt. But, at the same time, it is no cause for celebration — indeed, quite the opposite. Greece must eventually carry out painful reforms. But the precondition for these reforms is not the austerity demanded by the agreement but economic revival. Greece is already in critical condition and Monday’s agreement will only make things worse.

Years of austerity and depression have poisoned Greek politics, idled more than one in four of its workers (and nearly two in three of its young people) and torn holes in its social safety net.
These sacrifices have choked off investment and squandered human resources. Experts say there is little chance that further sacrifices will revive Greece’s economy or make its debt burden more sustainable. Yet that is just what the European Commission, European Central Bank and International Monetary Fund have again insisted on. Greece’s prime minister, Antonis Samaras, felt he had no choice but to accept. He agreed to cut public-sector paychecks and eliminate 15,000 Civil Service jobs — not by attrition, but by dismissing the current jobholders.
Greece’s Civil Service is bloated, patronage-ridden and inefficient, and it clearly needs reform as part of a broader program of economic renewal and revival. But throwing thousands more out of work when the unemployment rate is 27 percent is not a promising path to real reform, especially when done on the orders of foreign bankers. The last such round of public-sector cuts, in June, which shut down the state broadcasting system, badly backfired and nearly shattered Mr. Samaras’s fragile governing coalition.
Monday’s agreement also calls for a staggered payment schedule that will allow the lenders to suspend bailout payments if Greece has not met its job-cutting commitments by July 19.
In brief, the more implausible austerity becomes as an economic remedy, the more unchallengeable it seems to become as a political mantra. Its most consistent advocate, Chancellor Angela Merkel of Germany, is up for re-election this September. She is unlikely to change her tune — which is popular among German taxpayers — before that. Nor is she likely to change it if she wins another term.
Other lenders like the International Monetary Fund seem more troubled by evidence that austerity has done real damage to the Greek economy. But that realization has, so far, brought no change in policy and no relief to suffering Greeks.