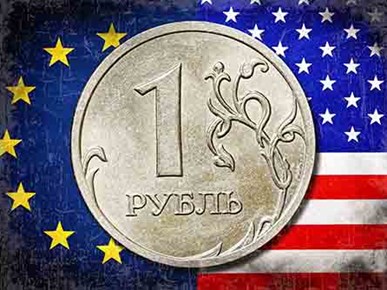 With the crisis in Ukraine intensifying, the United States and the European Union are locked in a battle of wills – and sanctions – with Russia. Indeed, in retaliation for the intensification of Western financial sanctions, Russia has announced a ban on food and agricultural imports from the US and the EU. But the real threat to the West lies in the potential impact of a financial crisis sparked by its own sanctions against Russia.

Consider Russia’s 1998 financial crisis. In August of that year, then-President Boris Yeltsin declared, “There will be no devaluation – that is firm and definite.” Three days later, the ruble was devalued, and Russian financial markets went into a tailspin. With capital pouring out of the country, the Russian government was forced to restructure its debt, and the economy entered a deep recession.

Though Russia was relatively insignificant financially, its crisis had far-reaching consequences. Among the worst affected was Argentina;

the Russian crisis exacerbated a decline in investors’ confidence in emerging markets that culminated in Argentina’s sovereign default less than four years later. Even the US and Europe were not immune, with the collapse of the major hedge fund Long-Term Capital Management (LTCM) fueling anxiety about the viability of many other financial institutions.

Today’s financial dramas bear a striking resemblance to this experience. Argentina has technically defaulted; American and European financial institutions and markets are jittery; and Russia is promising that the sanctions it faces will have no impact on its economy.

The most obvious similarity is Russian President Vladimir Putin’s assertions that his country can weather any and all Western sanctions. That may be wishful thinking. In fact, barring most major Russian banks from operating freely in Western capital markets could affect the entire Russian economy, not just the banks themselves. And the central bank’s decision to raise interest rates to buttress the ruble may lead to much tighter credit conditions for companies and households, pushing the Russian economy into recession this year and next.

The problem with financial sanctions is that no one knows precisely how they will unfold – especially in an economy as large as Russia’s. If they prove to be more effective than intended, they will pose a serious threat to global financial stability.

The restrictions on Russian banks operating in Europe and the US appear modest. The banks can still access money markets, cover their short-term financing needs, and count on the central bank for support. But investors’ risk appetite could easily shift, spurring them to withdraw large amounts of capital. Though Russia’s public debt is modest, its foreign-exchange reserves large, and its economy much stronger than in 1998, once the herd is running, it is impossible to stop it.

Having just emerged from a deep recession, financial disruptions could easily cause Europe to slide back into recession, particularly given the eurozone economy’s close links to Russia via trade and energy.

Compounding the problem, no one truly understands the precise connections among Russian and European institutions and markets. The collapse of LTCM in 1998 was completely unexpected. Is Europe today prepared to deal with a similar failure of an important financial institution?

The financial sanctions on Russia are not targeted, temporary, or fully credible. If they affect Russia’s entire economy, hitting ordinary citizens the hardest, popular support for Putin’s regime may solidify further. Of course, an economic slowdown could erode Putin’s popular support, which is based on the gains in living standards made under his leadership. In that case, Putin’s response could be even more damaging.

Another problem is that implementing sanctions that cannot be reversed quickly removes the incentive for Russia to return to the negotiating table, especially because the threat of an escalation of financial sanctions lacks credibility, given the risk to European and US financial stability.

Once these sanctions begin to bite, no one can say who will be hurt – or how badly. And, as Russia’s experience in 1998, and Argentina’s after 2002, demonstrated, the process of restoring confidence among market participants is a long and painful one.

These concerns do not mean that the US and the EU should not impose sanctions on Russia for its illegal annexation of Crimea and continuing efforts to destabilize eastern Ukraine. But sanctions that hit the real side of the Russian economy – such as energy, natural resources, and the military – could provide a better solution. Though such sanctions may not work as quickly, they would be targeted, temporary, and credible, enabling the US and Europe to control – and adjust – the impact on the Russian leadership and economy.

In any case, US and European leaders must recognize that all sanctions will have costs – many of them unexpected – for both sides. If they are not willing to risk global financial stability in an unpredictable game of chicken with Putin, perhaps it would be wise to re-think the composition of the sanctions that they impose.

Marcel Fratzscher, a former head of International Policy Analysis at the European Central Bank, is President of DIW Berlin, a research institute and think tank, and a professor of macroeconomics and finance at Humboldt University.
Το άρθρο δημοσιεύεται στο www.project-syndicate.org