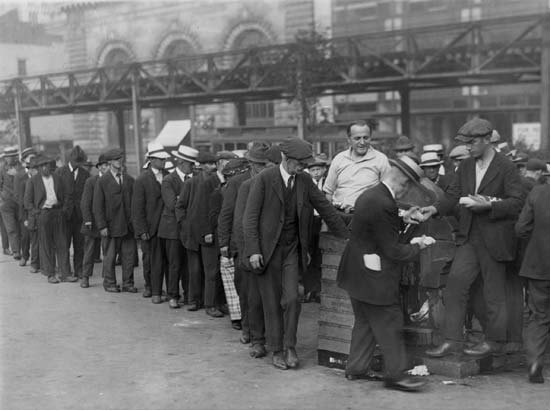 The depression that followed the stock-market crash of 1929 took a turn for the worse eight years later, and recovery came only with the enormous economic stimulus provided by World War II, a conflict that cost more than 60 million lives. By the time recovery finally arrived, much of Europe and Asia lay in ruins.

The current world situation is not nearly so dire, but there are parallels, particularly to 1937. Now, as then, people have been disappointed for a long time, and many are despairing. They are becoming more fearful for their long-term economic future. And such fears can have severe consequences.

For example, the impact of the 2008 financial crisis on the Ukrainian and Russian economies might ultimately be behind the recent war there. According to the International Monetary Fund, both Ukraine and Russia experienced spectacular growth from 2002 to 2007: over those five years, real per capita GDP rose 52% in Ukraine and 46% in Russia. That is history now: real per capita GDP growth was only 0.2% last year in Ukraine, and only 1.3% in Russia.

The discontent generated by such disappointment may help to explain Ukrainian separatists’ anger, Russians’ discontent, and Russian President Vladimir Putin’s decision to annex Crimea and to support the separatists.

There is a name for the despair that has been driving discontent – and not only in Russia and Ukraine – since the financial crisis. That name is the “new normal,” referring to long-term diminished prospects for economic growth, a term popularized by Bill Gross, a founder of bond giant PIMCO.

The despair felt after 1937 led to the emergence of similar new terms then, too. “Secular stagnation,” referring to long-term economic malaise, is one example. The word secular comes from the Latin saeculum, meaning a generation or a century. The word stagnation suggests a swamp, implying a breeding ground for virulent dangers. In the late 1930s, people were also worrying about discontent in Europe, which had already powered the rise of Adolph Hitler and Benito Mussolini.

The other term that suddenly became prominent around 1937 was “underconsumptionism” – the theory that fearful people may want to save too much for difficult times ahead. Moreover, the amount of saving that people desire exceeds the available investment opportunities. As a result, the desire to save will not add to aggregate saving to start new businesses, construct and sell new buildings, and so forth. Though investors may bid up prices of existing capital assets, their attempts to save only slow down the economy.

“Secular stagnation” and “underconsumptionism” are terms that betray an underlying pessimism, which, by discouraging spending, not only reinforces a weak economy, but also generates anger, intolerance, and a potential for violence.

In his magnum opus The Moral Consequences of Economic Growth, Benjamin M. Friedman showed many examples of declining economic growth giving rise – with variable and sometimes long lags – to intolerance, aggressive nationalism, and war. He concluded that, “The value of a rising standard of living lies not just in the concrete improvements it brings to how individuals live but in how it shapes the social, political, and ultimately the moral character of a people.”

Some will doubt the importance of economic growth. Maybe, many say, we are too ambitious and ought to enjoy a higher quality of life with more leisure. Maybe they are right.

But the real issue is self-esteem and the social-comparison processes that psychologist Leon Festinger observed as a universal human trait. Though many will deny it, we are always comparing ourselves with others, and hoping to climb the social ladder. People will never be happy with newfound opportunities for leisure if it seems to signal their failure relative to others.

The hope that economic growth promotes peace and tolerance is based on people’s tendency to compare themselves not just to others in the present, but also to the what they remember of people – including themselves – in the past. According to Friedman, “Obviously nothing can enable the majority of the population to be better off than everyone else. But not only is it possible for most people to be better off than they used to be, that is precisely what economic growth means.”

The downside of the sanctions imposed against Russia for its behavior in eastern Ukraine is that they may produce a recession throughout Europe and beyond. That will leave the world with unhappy Russians, unhappy Ukrainians, and unhappy Europeans whose sense of confidence and support for peaceful democratic institutions will weaken.

While some kinds of sanctions against international aggression appear to be necessary, we must remain mindful of the risks associated with extreme or punishing measures. It would be highly desirable to come to an agreement to end the sanctions; to integrate Russia (and Ukraine) more fully into the world economy; and to couple these steps with expansionary economic policies. A satisfactory resolution of the current conflict requires nothing less.

*Robert J. Shiller, a 2013 Nobel laureate in economics, is Professor of Economics at Yale University and the co-creator of the Case-Shiller Index of US house prices. He is the author of Irrational Exuberance, the second edition of which predicted the coming collapse of the real-estate bubble, and, most recently, Finance and the Good Society.
Το άρθρο δημοσιιεύεται στο www.project-syndicate.org