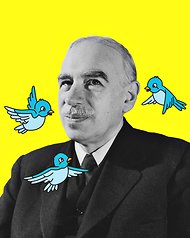 FOR someone who’s been dead for 65 years, John Maynard Keynes has amazing presence. Open a paper, click on a blog or TV, and, voilà, like Waldo, he’s everywhere. The British economic oracle — whose boyhood nickname Snout should tell you that a pretty face isn’t why he’s hot — gets more Google hits than Leonardo DiCaprio. Gov. Rick Perry of Texas apparently got so fed up with the old scene stealer that he interrupted a recent Republican debate to flash his rivals the news that Keynes was, well, deceased.

For some, Keynes is the hero who rescued the West from the Great Depression, forothers the villain to blame for the current mess. To me, he’s neither, but rather the Winston Churchill of economics, radiating optimism when things looked bleakest, never so happily engaged as in a national or global emergency.

An emergency is what we’re having now, of course. Unemployment has been stuck around 9 percent for more than two years. Business is treading water. Families have less cash to spend. Markets are in turmoil. All our old anxieties have us by the throat again: the American Dream is dead; the middle class is disappearing; our children won’t live as well as we do. Never mind that similar fears proved groundless in the past. When you’re scared in the middle of the night, it’s almost impossible to imagine morning.
Keynes could, though. He had a surprising ability to see beyond the grim present to better days — especially for someone who famously noted that “in the long run we are all dead.”

Keynes’s sunny optimism was most striking in the midst of one of the darkest chapters of modern economic history. If we think of the recession of 2007-9 as a Category 1 hurricane, the Great Depression would qualify as a Category 5. Income, per person, was one-fifth of what it is today, adjusted for inflation. Unemployment was nearly three times as high. More than a third of the population was destitute. There were virtually no government benefits.

Preachers talked of Armageddon, and pundits contemplated “the possibility that the Western system of society might break down and cease to work.” Keynes, however, reassured fellow citizens, in a silvery, seductive voice that was one of his sexiest features, that what came before “was not a dream. This is a nightmare, which will pass away with the morning.”

Admittedly, Keynes had no more seen the hurricane coming than his counterparts predicted the crises of 1893 or 1907 or those of the 1990s or 2008. Irving Fisher’s ill-timed pronouncement, just before the crash of 1929, that “stocks have reached a permanently high plateau” will never be forgotten. Keynes was equally surprised and forced to put his two favorite Impressionist paintings up for sale. Still, he wasn’t about to waste time ruing past failures when panic was in the air. Instead, he quickly began reassuring the British public that “we are suffering just now from a bad attack of economic pessimism.”

Boldly, he predicted that by the time his great-nieces and great-nephews were adults, mankind would have solved its “economic problem.” At least in the West, the material requisites for a good life would be available to all.

He did not dismiss the dangers of 25 percent unemployment, nor advocate that government embrace nature’s cure and wait it out. But he disagreed vehemently with those who called for draconian or dictatorial measures. He insisted that the Western economies were suffering from a mechanical breakdown for which there was a relatively easy fix. (For someone who didn’t drive, he was inordinately fond of vehicular metaphors.)

There was, moreover, a solution. Breaking the vicious circle that deflation was creating for farmers and businessmen was well within the power of governments. All the monetary authorities had to do was lower interest rates by creating more money until business could raise prices and would find it worthwhile to begin investing again.

When the Depression failed to respond to monetary policy but instead deepened and spread, Keynes went back to the drawing board. By 1936 he had worked out a new theory of slumps resistant to the usual cures of easy money and low interest rates, calling it, with his trademark lack of modesty, “The General Theory of Employment, Interest and Money.”

What never changed during the Depression and the Second World War was Keynes’s positive mind-set.

Sylvia Nasar is the author of  “Grand Pursuit: The Story of Economic Genius.”