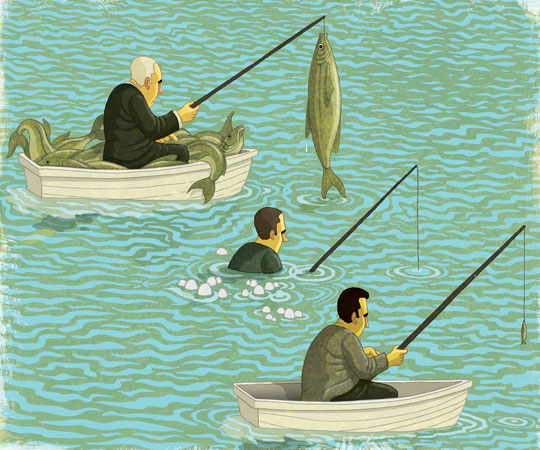 It is generally agreed that the crisis of 2008-2009 was caused by excessive bank lending, and that the failure to recover adequately from it stems from banks’ refusal to lend, owing to their “broken” balance sheets.

A typical story, much favored by followers of Friedrich von Hayek and the Austrian School of economics, goes like this: In the run up to the crisis, banks lent more money to borrowers than savers would have been prepared to lend otherwise, thanks to excessively cheap money provided by central banks, particularly the United States Federal Reserve. Commercial banks, flush with central banks’ money, advanced credit for many unsound investment projects, with the explosion of financial innovation (particularly of derivative instruments) fueling the lending frenzy.

This inverted pyramid of debt collapsed when the Fed finally put a halt to the spending spree by hiking up interest rates. (The Fed raised its benchmark federal funds rate from 1% in 2004 to 5.25% in 2006 and held it there until August 2007). As a result, house prices collapsed, leaving a trail of zombie banks (whose liabilities far exceeded their assets) and ruined borrowers.

CommentsThe problem now appears to be one of re-starting bank lending. Impaired banks that do not want to lend must somehow be “made whole.” This has been the purpose of the vast bank bailouts in the US and Europe, followed by several rounds of “quantitative easing,” by which central banks print money and pump it into the banking system through a variety of unorthodox channels. (Hayekians object to this, arguing that, because the crisis was caused by excessive credit, it cannot be overcome with more.)

At the same time, regulatory regimes have been toughened everywhere to prevent banks from jeopardizing the financial system again. For example, in addition to its price-stability mandate, the Bank of England has been given the new task of maintaining “the stability of the financial system.”

This analysis, while seemingly plausible, depends on the belief that it is the supply of credit that is essential to economic health: too much money ruins it, while too little destroys it.
But one can take another view, which is that demand for credit, rather than supply, is the crucial economic driver. After all, banks are bound to lend on adequate collateral; and, in the run-up to the crisis, rising house prices provided it. The supply of credit, in other words, resulted from the demand for credit.
This puts the question of the origins of the crisis in a somewhat different light. It was not so much predatory lenders as it was imprudent, or deluded, borrowers, who bear the blame. So the question arises: Why did people want to borrow so much? Why did the ratio of household debt to income soar to unprecedented heights in the pre-recession days?
et us agree that people are greedy, and that they always want more than they can afford. Why, then, did this “greed” manifest itself so manically?

To answer that, we must look at what was happening to the distribution of income. The world was getting steadily richer, but the income distribution within countries was becoming steadily more unequal. Median incomes have been stagnant or even falling for the last 30 years, even as per capita GDP has grown. This means that the rich have been creaming off a giant share of productivity growth.

And what did the relatively poor do to “keep up with the Joneses” in this world of rising standards? They did what the poor have always done: got into debt. In an earlier era, they became indebted to the pawnbroker; now they are indebted to banks or credit-card companies. And, because their poverty was only relative and house prices were racing ahead, creditors were happy to let them sink deeper and deeper into debt.

Of course, some worried about the collapse of the household savings rate, but few were overly concerned. In one of his last articles, Milton Friedman wrote that savings nowadays took the form of houses.

To me, this view of things explains much better than the orthodox account why, for all the money-pumping by central banks, commercial banks have not started lending again, and the economic recovery has petered out. Just as lenders did not force money on the public before the crisis, so now they cannot force heavily indebted households to borrow, or businesses to seek loans to expand production when markets are flat or shrinking.

If governments, with their already-high level of indebtedness, believe that they cannot borrow any more from the public, they should borrow from their central banks and spend the extra money themselves on public works and infrastructure projects. This is the only way to get the big economies of the West moving again.

But, beyond this, we cannot carry on with a system that allows so much of the national income and wealth to pile up in so few hands. Concerted redistribution of wealth and income has frequently been essential to the long-term survival of capitalism. We are about to learn that lesson again.

Robert Skidelsky, Professor Emeritus of Political Economy at Warwick University and a fellow of the British Academy in history and economics, is a member of the British House of Lords. The author of a three-volume biography of John Maynard Keynes, he began his political career in the Labour party, became the Conservative Party’s spokesman for Treasury affairs in the House of Lords, and was eventually forced out of the Conservative Party for his opposition to NATO’s intervention in Kosovo in 1999.