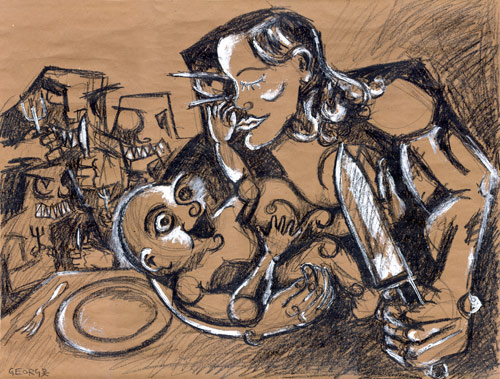 What we need now is another Jonathan Swift. Most people know Swift as the author of “Gulliver’s Travels.” But recent events have me thinking of his 1729 essay “A Modest Proposal,” in which he observed the dire poverty of the Irish, and offered a solution: sell the children as food.

“I grant this food will be somewhat dear,” he admitted, but this would make it “very proper for landlords, who, as they have already devoured most of the parents, seem to have the best title to the children.”

O.K., these days it’s not the landlords, it’s the bankers — and they’re just impoverishing the populace, not eating it. But only a satirist — and one with a very savage pen — could do justice to what’s happening to Ireland now.

The Irish story began with a genuine economic miracle. But eventually this gave way to a speculative frenzy driven by runaway banks and real estate developers, all in a cozy relationship with leading politicians. The frenzy was financed with huge borrowing on the part of Irish banks, largely from banks in other European nations.

Then the bubble burst, and those banks faced huge losses. You might have expected those who lent money to the banks to share in the losses. After all, they were consenting adults, and if they failed to understand the risks they were taking that was nobody’s fault but their own. But, no, the Irish government stepped in to guarantee the banks’ debt, turning private losses into public obligations.

Before the bank bust, Ireland had little public debt. But with taxpayers suddenly on the hook for gigantic bank losses, even as revenues plunged, the nation’s creditworthiness was put in doubt. So Ireland tried to reassure the markets with a harsh program of spending cuts.

Step back for a minute and think about that. These debts were incurred, not to pay for public programs, but by private wheeler-dealers seeking nothing but their own profit. Yet ordinary Irish citizens are now bearing the burden of those debts.
Or to be more accurate, they’re bearing a burden much larger than the debt — because those spending cuts have caused a severe recession so that in addition to taking on the banks’ debts, the Irish are suffering from plunging incomes and high unemployment.

But there is no alternative, say the serious people: all of this is necessary to restore confidence.

Strange to say, however, confidence is not improving. On the contrary: investors have noticed that all those austerity measures are depressing the Irish economy — and are fleeing Irish debt because of that economic weakness.

Now what? Last weekend Ireland and its neighbors put together what has been widely described as a “bailout.” But what really happened was that the Irish government promised to impose even more pain, in return for a credit line — a credit line that would presumably give Ireland more time to, um, restore confidence. Markets, understandably, were not impressed: interest rates on Irish bonds have risen even further.

Does it really have to be this way?

In early 2009, a joke was making the rounds: “What’s the difference between Iceland and Ireland? Answer: One letter and about six months.” This was supposed to be gallows humor. No matter how bad the Irish situation, it couldn’t be compared with the utter disaster that was Iceland.

But at this point Iceland seems, if anything, to be doing better than its near-namesake. Its economic slump was no deeper than Ireland’s, its job losses were less severe and it seems better positioned for recovery. In fact, investors now appear to consider Iceland’s debt safer than Ireland’s. How is that possible?

Part of the answer is that Iceland let foreign lenders to its runaway banks pay the price of their poor judgment, rather than putting its own taxpayers on the line to guarantee bad private debts. As the International Monetary Fund notes — approvingly! — “private sector bankruptcies have led to a marked decline in external debt.” Meanwhile, Iceland helped avoid a financial panic in part by imposing temporary capital controls — that is, by limiting the ability of residents to pull funds out of the country.

And Iceland has also benefited from the fact that, unlike Ireland, it still has its own currency; devaluation of the krona, which has made Iceland’s exports more competitive, has been an important factor in limiting the depth of Iceland’s slump.

None of these heterodox options are available to Ireland, say the wise heads. Ireland, they say, must continue to inflict pain on its citizens — because to do anything else would fatally undermine confidence.

But Ireland is now in its third year of austerity, and confidence just keeps draining away. And you have to wonder what it will take for serious people to realize that punishing the populace for the bankers’ sins is worse than a crime; it’s a mistake.