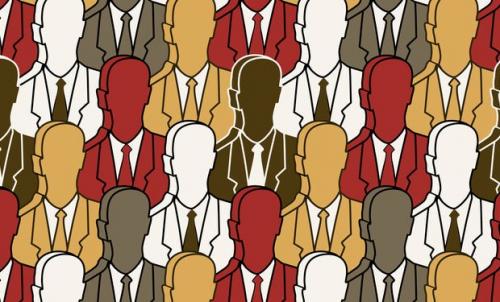 Have you heard about “libertarian populism” yet? If not, you will. It will surely be touted all over the airwaves and the opinion pages by the same kind of people who assured you, a few years ago, that Representative Paul Ryan was the very model of a Serious, Honest Conservative. So let me make a helpful public service announcement: It’s bunk.

Some background: These are tough times for members of the conservative intelligentsia — those denizens of think tanks and opinion pages who dream of Republicans once again becoming “the party of ideas.” (Whether they ever were that party is another question.)
For a while, they thought they had found their wonk hero in the person of Mr. Ryan. But the famous Ryan plan turned out to be crude smoke and mirrors, and I suspect that even conservatives privately realize that its author is more huckster than visionary. So what’s the next big idea?
Enter libertarian populism. The idea here is that there exists a pool of disaffected working-class white voters who failed to turn out last year but can be mobilized again with the right kind of conservative economic program — and that this remobilization can restore the Republican Party’s electoral fortunes.
You can see why many on the right find this idea appealing. It suggests that Republicans can regain their former glory without changing much of anything — no need to reach out to nonwhite voters, no need to reconsider their economic ideology. You might also think that this sounds too good to be true — and you’d be right. The notion of libertarian populism is delusional on at least two levels.
First, the notion that white mobilization is all it takes rests heavily on claims by the political analyst Sean Trende that Mitt Romney fell short last year largely because of “missing white voters” — millions of “downscale, rural, Northern whites” who failed to show up at the polls. Conservatives opposed to any major shifts in the G.O.P. position — and, in particular, opponents of immigration reform — quickly seized on Mr. Trende’s analysis as proof that no fundamental change is needed, just better messaging.
But serious political scientists like Alan Abramowitz and Ruy Teixeira have now weighed in and concluded that the missing-white-voter story is a myth. Yes, turnout among white voters was lower in 2012 than in 2008; so was turnout among nonwhite voters. Mr. Trende’s analysis basically imagines a world in which white turnout rebounds to 2008 levels but nonwhite turnout doesn’t, and it’s hard to see why that makes sense.
Suppose, however, that we put this debunking on one side and grant that Republicans could do better if they could inspire more enthusiasm among “downscale” whites. What can the party offer that might inspire such enthusiasm?
Well, as far as anyone can tell, at this point libertarian populism — as illustrated, for example, by the policy pronouncements of Senator Rand Paul — consists of advocating the same old policies, while insisting that they’re really good for the working class. Actually, they aren’t. But, in any case, it’s hard to imagine that proclaiming, yet again, the virtues of sound money and low marginal tax rates will change anyone’s mind.
Moreover, if you look at what the modern Republican Party actually stands for in practice, it’s clearly inimical to the interests of those downscale whites the party can supposedly win back. Neither a flat tax nor a return to the gold standard are actually on the table; but cuts in unemployment benefits, food stamps and Medicaid are. (To the extent that there was any substance to the Ryan plan, it mainly involved savage cuts in aid to the poor.) And while many nonwhite Americans depend on these safety-net programs, so do many less-well-off whites — the very voters libertarian populism is supposed to reach.
Specifically, more than 60 percent of those benefiting from unemployment insurance are white. Slightly less than half of food stamp beneficiaries are white, but in swing states the proportion is much higher. For example, in Ohio, 65 percent of households receiving food stamps are white. Nationally, 42 percent of Medicaid recipients are non-Hispanic whites, but, in Ohio, the number is 61 percent.
So when Republicans engineer sharp cuts in unemployment benefits, block the expansion of Medicaid and seek deep cuts in food stamp funding — all of which they have, in fact, done — they may be disproportionately hurting Those People; but they are also inflicting a lot of harm on the struggling Northern white families they are supposedly going to mobilize.
Which brings us back to why libertarian populism is, as I said, bunk. You could, I suppose, argue that destroying the safety net is a libertarian act — maybe freedom’s just another word for nothing left to lose. But populist it isn’t.