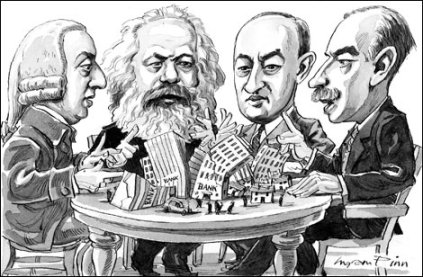 Mr. Obama’s clearly deliberate neglect of Washington’s favorite obsession was just the latest sign that the self-styled deficit hawks — better described as deficit scolds — are losing their hold over political discourse. And that’s a very good thing. Why have the deficit scolds lost their grip? I’d suggest four interrelated reasons.

First, they have cried wolf too many times. They’ve spent three years warning of imminent crisis — if we don’t slash the deficit now now now, we’ll turn into Greece, Greece, I tell you. It is, for example, almost two years since Alan Simpson and Erskine Bowles declared that we should expect a fiscal crisis within, um, two years.

But that crisis keeps not happening. The still-depressed economy has kept interest rates at near-record lows despite large government borrowing, just as Keynesian economists predicted all along. So the credibility of the scolds has taken an understandable, and well-deserved, hit.
Second, both deficits and public spending as a share of G.D.P. have started to decline — again, just as those who never bought into the deficit hysteria predicted all along.
The truth is that the budget deficits of the past four years were mainly a temporary consequence of the financial crisis, which sent the economy into a tailspin — and which, therefore, led both to low tax receipts and to a rise in unemployment benefits and other government expenses. It should have been obvious that the deficit would come down as the economy recovered. But this point was hard to get across until deficit reduction started appearing in the data.
Now it has — and reasonable forecasts, like those of Jan Hatzius of Goldman Sachs, suggest that the federal deficit will be below 3 percent of G.D.P., a not very scary number, by 2015.
And it was, in fact, a good thing that the deficit was allowed to rise as the economy slumped. With private spending plunging as the housing bubble popped and cash-strapped families cut back, the willingness of the government to keep spending was one of the main reasons we didn’t experience a full replay of the Great Depression. Which brings me to the third reason the deficit scolds have lost influence: the contrary doctrine, the claim that we need to practice fiscal austerity even in a depressed economy, has failed decisively in practice.
Consider, in particular, the case of Britain. In 2010, when the new government of Prime Minister David Cameron turned to austerity policies, it received fulsome praise from many people on this side of the Atlantic. For example, the late David Broder urged President Obama to “do a Cameron”; he particularly commended Mr. Cameron for “brushing aside the warnings of economists that the sudden, severe medicine could cut short Britain’s economic recovery and throw the nation back into recession.”
Sure enough, the sudden, severe medicine cut short Britain’s economic recovery, and threw the nation back into recession.
At this point, then, it’s clear that the deficit-scold movement was based on bad economic analysis. But that’s not all: there was also clearly a lot of bad faith involved, as the scolds tried to exploit an economic (not fiscal) crisis on behalf of a political agenda that had nothing to do with deficits. And the growing transparency of that agenda is the fourth reason the deficit scolds have lost their clout.
What was it that finally pulled back the curtain here? Was it the way the election campaign revealed Representative Paul Ryan, who received a “fiscal responsibility” award from three leading deficit-scold organizations, as the con man he always was? Was it the decision of David Walker, alleged crusader for sound budgets, to endorse Mitt Romney and his budget-busting tax cuts for the rich? Or was it the brazenness of groups like Fix the Debt — basically corporate C.E.O.’s declaring that you should be forced to delay your retirement while they get to pay lower taxes?
The answer probably is, all of the above. In any case, an era has ended. Prominent deficit scolds can no longer count on being treated as if their wisdom, probity and public-spiritedness were beyond question. But what difference will that make?
Sad to say, G.O.P. control of the House means that we won’t do what we should be doing: spend more, not less, until the recovery is complete. But the fading of deficit hysteria means that the president can turn his focus to real problems. And that’s a move in the right direction.