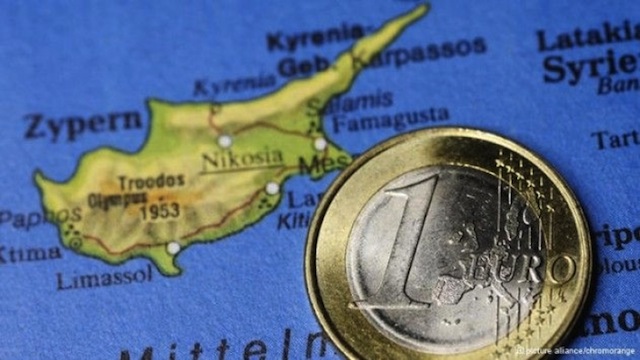 A correspondent whom I respect has (gently) challenged me to say plainly what I think Cyprus should do — leaving aside all questions about political realism. And he’s right: while I think it’s OK to spend most of my time on this blog working within the limits of the politically possible, and relying on a combination of reason and ridicule to push out those limits over time, once in a while I should just flatly state what I would do if given a chance.

So here it is: yes, Cyprus should leave the euro. Now.
The reason is straightforward: staying in the euro means an incredibly severe depression, which will last for many years while Cyprus tries to build a new export sector. Leaving the euro, and letting the new currency fall sharply, would greatly accelerate that rebuilding.
If you look at Cyprus’s trade profile, you see just how much damage the country is about to sustain. This is a highly open economy with just two major exports, banking services and tourism — and one of them just disappeared. This would lead to a severe slump on its own. On top of that, the troika is demanding major new austerity, even though the country supposedly has rough primary (non-interest) budget balance. I wouldn’t be surprised to see a 20 percent fall in real GDP.
What’s the path forward? Cyprus needs to have a tourist boom, plus a rapid growth of other exports — my guess would be agriculture as a driver, although I don’t know much about it. The obvious way to get there is through a large devaluation; yes, in the end this probably does come down to cheap deals that attract lots of British package tours.
Getting to the same point by cutting nominal wages would take much longer and inflict much more human and economic damage.
But is it even possible to leave the euro? The Eichengreen point — that even a hint of exit would cause panicked capital flight and bank runs — is now moot: the banks are closed, and capital is controlled. So if I were dictator, I’d just extend the bank holiday long enough to prepare for the new currency.
OK, what about the bank notes? I’m no kind of expert in such matters, but I’ve heard suggestions to the effect that it might be possible to rush debit cards into circulation, so that business could resume without having to wait for someone to run the printing presses. The government might also be able to issue temporary scrip, IOUs that don’t look like proper bank notes, as a transitional measure.
Yes, it all sounds kind of desperate and improvised. But desperation is appropriate! Otherwise, we’re talking about Greek-level austerity or worse in an economy whose fundamentals, thanks to the implosion of offshore banking, are much worse than Greece’s ever were.
My guess is that none of this will happen, at least not right away, that the country’s leadership will fear the leap into the unknown that would come from euro exit despite the obvious horror of trying to stay in. But as I said, I think euro exit is now the right thing to do.