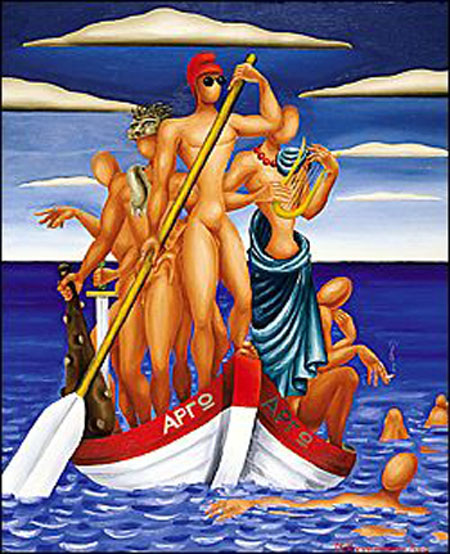 So, about that fiscal crisis — the one that would, any day now, turn us into Greece. Greece, I tell you: Never mind. Over the past few weeks, there has been a remarkable change of position among the deficit scolds who have dominated economic policy debate for more than three years. It’s as if someone sent out a memo saying that the Chicken Little act, with its repeated warnings of a U.S. debt crisis that keeps not happening, has outlived its usefulness.
Suddenly, the argument has changed: It’s not about the crisis next month; it’s about the long run, about not cheating our children. The deficit, we’re told, is really a moral issue.
There’s just one problem: The new argument is as bad as the old one. Yes, we are
cheating our children, but the deficit has nothing to do with it.
Before I get there, a few words about the sudden switch in arguments.
There has, of course, been no explicit announcement of a change in position. But the signs are everywhere.

Pundits who spent years trying to foster a sense of panic over the deficit have begun writing pieces lamenting the likelihood that there won’t be a crisis, after all. Maybe it wasn’t that significant when President Obama declared that we don’t face any “immediate” debt crisis, but it did represent a change in tone from his previous deficit-hawk rhetoric. And it was startling, indeed, when John Boehner, the speaker of the House, said exactly the same thing a few days later.

What happened? Basically, the numbers refuse to cooperate: Interest rates remain stubbornly low, deficits are declining and even 10-year budget projections basically show a stable fiscal outlook rather than exploding debt.
So talk of a fiscal crisis has subsided. Yet the deficit scolds haven’t given up on their determination to bully the nation into slashing Social Security and Medicare. So they have a new line: We must bring down the deficit right away because it’s “generational warfare,” imposing a crippling burden on the next generation.
What’s wrong with this argument? For one thing, it involves a fundamental misunderstanding of what debt does to the economy.
Contrary to almost everything you read in the papers or see on TV, debt doesn’t directly make our nation poorer; it’s essentially money we owe to ourselves. Deficits would indirectly be making us poorer if they were either leading to big trade deficits, increasing our overseas borrowing, or crowding out investment, reducing future productive capacity. But they aren’t: Trade deficits are down, not up, while business investment has actually recovered fairly strongly from the slump. And the main reason businesses aren’t investing more is inadequate demand. They’re sitting on lots of cash, despite soaring profits, because there’s no reason to expand capacity when you aren’t selling enough to use the capacity you have. In fact, you can think of deficits mainly as a way to put some of that idle cash to use.
Yet there is, as I said, a lot of truth to the charge that we’re cheating our children. How? By neglecting public investment and failing to provide jobs.
You don’t have to be a civil engineer to realize that America needs more and better infrastructure, but the latest “report card” from the American Society of Civil Engineers — with its tally of deficient dams, bridges, and more, and its overall grade of D+ — still makes startling and depressing reading. And right now — with vast numbers of unemployed construction workers and vast amounts of cash sitting idle — would be a great time to rebuild our infrastructure. Yet public investment has actually plunged since the slump began.
Or what about investing in our young? We’re cutting back there, too, having laid off hundreds of thousands of schoolteachers and slashed the aid that used to make college affordable for children of less-affluent families.
Last but not least, think of the waste of human potential caused by high unemployment among younger Americans — for example, among recent college graduates who can’t start their careers and will probably never make up the lost ground.
And why are we shortchanging the future so dramatically and inexcusably? Blame the deficit scolds, who weep crocodile tears over the supposed burden of debt on the next generation, but whose constant inveighing against the risks of government borrowing, by undercutting political support for public investment and job creation, has done far more to cheat our children than deficits ever did.
Fiscal policy is, indeed, a moral issue, and we should be ashamed of what we’re doing to the next generation’s economic prospects. But our sin involves investing too little, not borrowing too much — and the deficit scolds, for all their claims to have our children’s interests at heart, are actually the bad guys in this story.