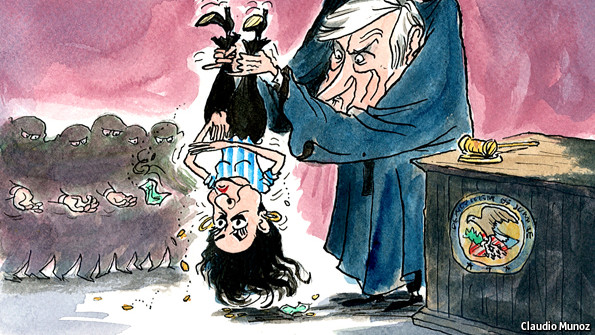 On July 30, Argentina’s creditors did not receive their semiannual payment on the bonds that were restructured after the country’s last default in 2001. Argentina had deposited $539 million in the Bank of New York Mellon a few days before. But the bank could not transfer the funds to the creditors: US federal judge Thomas Griesa had ordered that Argentina could not pay the creditors who had accepted its restructuring until it fully paid – including past interest – those who had rejected it.

It was the first time in history that a country was willing and able to pay its creditors, but was blocked by a judge from doing so. The media called it a default by Argentina, but the Twitter hashtag #Griesafault was much more accurate.

Argentina has fulfilled its obligations to its citizens and to the creditors who accepted its restructuring. Griesa’s ruling, however, encourages usurious behavior, threatens the functioning of international financial markets, and defies a basic tenet of modern capitalism: insolvent debtors need a fresh start.

Sovereign defaults are common events with many causes. For Argentina, the path to its 2001 default started with the ballooning of its sovereign debt in the 1990s, which occurred alongside neoliberal “Washington Consensus” economic reforms that creditors believed would enrich the country. The experiment failed, and the country suffered a deep economic and social crisis, with a recession that lasted from 1998 to 2002. By the end, a record-high 57.5% of Argentinians were in poverty, and the unemployment rate skyrocketed to 20.8%.

Argentina restructured its debt in two rounds of negotiations, in 2005 and 2010. More than 92% of creditors accepted the new deal, and received exchanged bonds and GDP-indexed bonds.

It worked out well for both Argentina and those who accepted the restructuring. The economy soared, so the GDP-indexed bonds paid off handsomely.

But so-called vulture investors saw an opportunity to make even larger profits. The vultures were neither long-term investors in Argentina nor the optimists who believed that Washington Consensus policies would work.

They then sued Argentina to obtain 100% of that value. NML Capital, a subsidiary of the hedge fund Elliot Management, headed by Paul Singer, spent $48 million on bonds in 2008; thanks to Griesa’s ruling, NML Capital should now receive $832 million – a return of more than 1,600%.

The figures are so high in part because the vultures seek to earn past interest, which, for some securities, includes a country-risk premium – the higher interest rate offered when they were issued to offset the larger perceived probability of default. Griesa found that this was reasonable. Economically, though, it makes no sense. When a country pays a risk premium on its debt, it means that default is a possibility. But if a court rules that a country always must repay the debt, there is no default risk to be compensated.

Repayment on Griesa’s terms would devastate Argentina’s economy. NML Capital and the other vultures comprise just 1% of the creditors, but would receive a total of $1.5 billion. Other holdouts (6.6% of total creditors) would receive $15 billion. And, because the debt restructuring stipulated that all of the creditors who accepted it could demand the same terms as holdouts receive, Argentina might be on the hook for $140 billion more.

Every Argentine might thus owe more than $3,500 – more than one-third of average annual per capita income. In the United States, applying the equivalent proportion would mean forcing every citizen to pay roughly $20,000 – all to line the pockets of some billionaires, intent on wringing the country dry.

What’s more, the existence of credit default swaps creates the possibility of further gains for the vultures. A CDS insures against a default, paying off if the bonds do not. They can yield substantial returns, regardless of whether the bonds are repaid – thus reducing their holders’ incentive to achieve an agreement.

In the run-up to July 30, the vultures conducted a scare campaign. A second default in 13 years would be a big setback for Argentina, they claimed, threatening the country’s fragile economy. But all of this presumed that financial markets would not distinguish between a default and a Griesafault. Fortunately, they did: Interest rates for different categories of Argentine corporate loans have not reacted to the event. In fact, borrowing costs on July 30 were lower than the average for the whole year.

Ultimately, though, the Griesafault will carry a high price – less for Argentina than for the global economy and countries needing access to foreign financing. America will suffer, too. Its courts have been a travesty: As one observer pointed out,it was clear that Griesa never really fathomed the issue’s complexity. The US financial system, already practiced at exploiting poor Americans, has extended its efforts globally. Sovereign borrowers will not – and should not – trust the fairness and competence of the US judiciary. The market for issuance of such bonds will move elsewhere.

*Joseph E. Stiglitz, a Nobel laureate in economics and University Professor at Columbia University, was Chairman of President Bill Clinton’s Council of Economic Advisers and served as Senior Vice President and Chief Economist of the World Bank. His most recent book, co-authored with Bruce Greenwald, is Creating a Learning Society: A New Approach to Growth, Development, and Social Progress.

*Martin Guzman is a postdoctoral research fellow at the Department of Economics and Finance at Columbia University Business School.