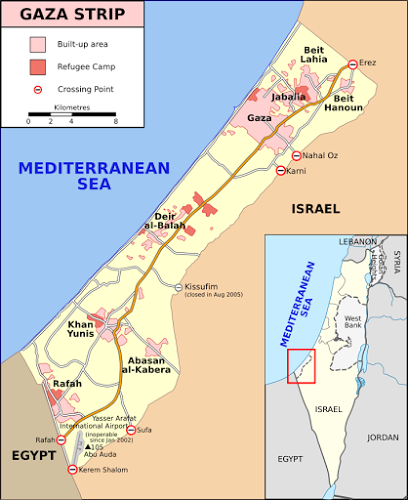 The current confrontation in Gaza began June 12 after three Israeli teenagers disappeared in the West Bank the month before. Israel announced the disappearance June 13, shortly thereafter placing blame on Hamas for the kidnappings. On June 14, Hamas fired three rockets into the Hof Ashkelon region. This was followed by Israeli attacks on Palestinians in the Jerusalem region. On July 8, the Israelis announced Operation Protective Edge and began calling up reservists. Hamas launched a longer-range rocket at Tel Aviv. Israel then increased its airstrikes against targets in Gaza.

At this point, it would appear that Israel has deployed sufficient force to be ready to conduct an incursion into Gaza. However, Israel has not done so yet. The conflict has consisted of airstrikes and some special operations forces raids by Israel and rocket launches by Hamas against targets in Israel.

From a purely military standpoint, the issue has been Hamas’s search for a deterrent to Israeli operations against Gaza. Operation Cast Lead in late 2008 and early 2009 disrupted Gaza deeply, and Hamas found itself without any options beyond attempts to impose high casualties on Israeli forces. But the size of the casualties in Cast Lead did not prove a deterrent.

Hamas augmented its short-range rocket arsenal with much longer-range rockets. The latest generation of rockets it has acquired can reach the population center of Israel: the triangle of Jerusalem, Tel Aviv and Haifa. However, these are rockets, not missiles. That means they have no guidance system, and their point of impact once launched is a matter of chance. Given these limits, Hamas hoped having a large number of rockets of different ranges would create the risk of substantial Israeli civilian casualties, and that that risk would deter Israel from action against Gaza.

The threat posed by the rockets was in fact substantial. According to senior Israeli Air Force officers quoted on the subject, Israel lacked intelligence on precisely where the rockets were stored and all the sites from which they might be launched. Gaza is honeycombed with a complex of tunnels, many quite deep. This limits intelligence. It also limits the ability of Israeli airborne munitions from penetrating to their storage area and destroying them.

The Israeli objective is to destroy Hamas’ rocket capacity. Israel ideally would like to do this from the air, but while some can be destroyed from the air, and from special operations, it appears the Israelis lack the ability to eliminate the threat. The only solution would be a large-scale assault on Gaza designed to occupy it such that a full-scale search for the weapons and their destruction on the ground would be possible.

Hamas has been firing rockets to convince the Israelis that they have enough to increase casualties in the triangle if they choose to. The Israelis must in fact assume that an assault on Gaza would in its earliest stages result in a massive barrage, especially since Hamas would be in a “use-it-or-lose-it” position. Hamas hopes this will deter an Israeli attack.

Thus far, Israel has restrained its attack beyond airstrikes. The extent to which the fear of massed rocketry was the constraining factor is not clear. Certainly, the Israelis are concerned that Hamas is better prepared for an attack than it was during Cast Lead, and that its ability to use anti-tank missiles against Israel’s Merkava tanks and improvised explosive devices against infantry has evolved. Moreover, the occupation of Gaza would be costly and complex. It would take perhaps weeks to search for rockets and in that time, Israeli casualties would mount. When the political consequences, particularly in Europe, of such an attack were added to this calculus, the ground component of Protective Edge was put off.

As mentioned, a major issue for the Israelis is the intelligence factor. It is said that Iran provided Hamas with these rockets via smuggling routes through Sudan. It is hard to imagine the route these weapons would take such that Israeli (and American) intelligence would not detect them on their thousand-plus mile transit, and that they would move into Gaza in spite of Israeli and Egyptian hostile watchfulness. Even if Iran didn’t provide the weapons, and someone else did, the same question would arise.

The failure of the Israelis to detect and interdict the movement of rockets or rocket parts has an immediate effect on the confidence with which senior Israeli commanders and political leaders calculate their course. Therefore, to this point, there has been a stalemate, with what we assume is a small fraction of Hamas’ rockets being fired, and limited operations against Gaza. The ground operation is being held in check for now.

While there have been a few public attempts to mediate between Hamas and Israel, most of these efforts have been lackluster, and the condemnations of violence and calls for peace have been more perfunctory than usual. Rather than leaving Egypt as the principle mediator, Turkey and Qatar have also weighed into the cease-fire discussion.  U.S. Secretary of State John Kerry also reportedly contacted Israeli Prime Minister Benjamin Netanyahu on Sunday, offering assistance in mediating a truce. Meanwhile, high-ranking diplomats from the United States, the United Kingdom, France and Germany discussed truce efforts on the sidelines of talks on Iran, and Israel’s government has began mulling a plan to offer development aid in exchange for a demilitarization of Gaza.

There is good reason for the slow pace of these cease-fire efforts, however. As evidenced by Hamas’ ability to replenish its rocket supply through routes traversing Sinai, Israel cannot rely exclusively on Egypt to uphold a cease-fire agreement — nor does it trust Qatar and Turkey to do so. Instead, Israel is attempting to place responsibility for cease-fire enforcement on its main external patron, the United States. Of equal importance, Hamas shares a deep distrust of the current regime in Egypt, given Hamas’ past links to the Muslim Brotherhood, whose brief reign in Egypt ended with a military coup. As these negotiations move slowly forward, Israel’s focus is on trying to degrade Hamas’ military capabilities enough to compensate for the weaknesses implicit in any cease-fire agreement. But tackling the problem primarily through the air has limits, and Israel’s questionable confidence in its own intelligence is what has prevented a ground incursion so far.

The problem for Israel in any cease-fire is that it would keep the current status quo in place. Hamas would retain its rockets, and might be able to attain more advanced models. Israel was not able to stop the influx of this load, so Israel can’t be confident that it can stop the next. A cease-fire is a victory for Hamas because they have retained their rocket force and have the potential to increase it. But for Israel, if it assumes that it cannot absorb the cost of rooting out all of the rockets (assuming that is possible) then a cease-fire brings it some political benefits without having to take too many risks.

At this moment, we know for certain that Israel is bombing Gaza and has amassed a force sufficient to initiate ground operations but has not done so. Hamas has not fired a saturation attack, assuming it could, but has forced Israel to assume that such an attack is possible, and that its Iron Dome defensive system would be overwhelmed by the numbers. The next move is Israel’s. We can assume there are those in the Israeli command authority arguing that the Gaza rockets will be fired at some point, and must be eliminated now, and others arguing that without better intelligence the likelihood of casualties and of triggering a saturation launch is too high.

We have no idea who will win the argument, if there is one, but right now, Israel is holding.Gaza Situation Report is republished with permission of Stratfor.” via www.makisandronopoulos.blogspot.gr

*George Friedman is the Chairman of Stratfor, a company he founded in 1996 that is now a leader in the field of global intelligence.  Friedman guides Stratfor’s strategic vision and oversees the development and training of the company’s intelligence unit.

Dr. Friedman is the author of The New York Times best-seller  The Next Decade, which forecasts the major events and challenges that  will test America and its presidents over the course  of the next decade. Dr. Friedman’s previous book, The Next  100 Years, was also a New  York Times best-seller and was published in over 20  languages. His other books on warfare and intelligence include America’s Secret War, The Future of War and The Intelligence Edge
Read more: George Friedman | Stratfor