WHY WE SHOULD WELCOME TURKEY 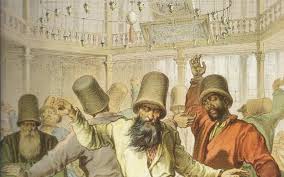 There’s a new opportunity to get Turkey on the path towards the European Union, according to news reports on May 18.

And it’s about time. Considering the current chaos in the Middle East – with Turkey footing the bill of a new refugee wave from Syria – and the energy dispute between Russia and the EU, Turkey’s European future must be urgently considered.

Of course anti-Turkish sentiment, jumbled up in rising Islamophobia and racist prejudices, will continue to try to block Turkey’s bid for EU membership. But Turkey’s place is, without a doubt, among us – as a member of the EU.

Despite the fact Turkey was born out of the Ottoman Empire and the two entities are completely different (the latter had a multinational structure and the first is a national state), we must accept that there was some continuity between them.

As such, historically the Turks have been a part of the European history since a very long time ago. They were players in the European world from the moment they moved their capital city to the Balkan city of Edirne in 1363.

The conquest of Constantinople by the Ottoman Turks, as painful and dramatic as it was for Christianity, marked the stabilisation of The Turks’ power as a European force. Blocked in the east by the powerful Persian Empire, they focussed on the conquest of European land.

The Middle East, the Arab Peninsula, Egypt and Maghreb were just stepping stones in the Ottoman Turks’ military advancement. As for the Turks’ political role as they moved toward Europe, it was never bigger than this.

In fact, the non European lands that belonged to the Ottoman Empire passed into a status of semi-autonomy while lands and people from their European conquests played a permanent role in the affairs of the state.

The Ottoman Empire was officially invited to participate as a key player in European affairs by French King Francis I in 1536. Since then the interest of the Sultans constantly targeted Europe.

To some extent, the Ottoman Empire was much more involved and part of the European affairs during the 16th, 17th and 18th centuries, than Russia ever was.

The Ottoman Empire was dismantled, as it happened, from the wars fought with the Habsburg (later Austrian) Empire. And from its dissolution there emerged the modern European Kingdoms of Greece, Bulgaria, Romania, Montenegro and Serbia.

Since the early 19th century, the Ottoman Empire tried to adopt new European methods, first in its military and secondly in politics with the 1909 Revolution of the Young Turks.

Turkish nationalism was in equal measure aggressive, bloody and intolerant as other European nationalistic movements at the time. The massacre of the Armenians in 1915 had the deep ideological signs of a European kind of nationalism.

In 1923, Turkey became a republic following a National Revolution under the leadership of Kemal Ataturk. Since then, except for several breaks of military juntas, Turkey has been a parliamentary republic. Its legal system adopted the European penal and civil codes, secularism was established, and women gained the right to vote in 1936.

The fact that in three instances dictatorships rose to power should not come as a surprise to us in Europe since many EU member states also experienced long or short periods of dictatorship during the 20th century.

Turkey declared from very early on its desire to become a member of the European and western institutions.

In 1949, Turkey asked to become a member of the then European Council. In 1952, Turkey (along with Greece) became a member of Nato.

But this whole process came to an abrupt end in 1974 when the Turkish army invaded Cyprus and occupied more than a third of its territory. It is this continuing occupation that still stands on the way of Turkey’s European prospects and needs to be lifted in order to unblock the path.

It was only in 1987, under the leadership of the liberal Turgut Ozal, that Turkey asked again to join the ECC.

In 1999, Turkey finally secured the status of an official candidate country. Negotiations did not begin until 2005. The above timeline suggests Turkey’s interest to join the European family has a long history. The question now is why Europeans are so afraid of this.

The origins of the Turks are not open for debate. The Turks are as European as the Hungarians, for example. According to their national myths, they arrived in Europe from Central Asia around the same time as the Turks. What is more, Estonians, Finns and Hungarians speak Altaic languages that are similar to the same family as the Turkic language.

The fact they are Muslims should not be an argument against EU membership either since Turkey is officially a secular state. In addition, they practically adopted the Judeo-Christian and Greco-roman political, legal and social culture as well.

It is in Europe’s best interest to have Turkey by its side.

This is for geostrategic reasons. The chaos that has ensnared the Middle East today and Turkey’s resistance to radicalisation makes its membership more important.

As regards energy, Turkey is a key player in Europe’s efforts to diversify its energy supply. For instance, the Azeri and Central Asian natural gas pipeline will pass through Turkey.

There are also economic reasons since Turkey represents a huge market. What is more, Turkey’s traditionally close relations with the Turkic-speaking world in Caucasus and Central Asia could further facilitate Europe’s penetration in these areas.

Following the enlargement of the EU, in many cases, this was mainly imposed by politics rather than the state of the economy. Many of the member states were admitted thanks to political decisions even against the negative views of the economists.

Today Turkey is at a crucial crossroad. Turkey’s President Recep Tayyip Erdogan’s government shows signs of a regime with authoritarian tendencies. Europe is partly responsible for this.

A few years ago, the findings of public opinion polls in Turkey showed a widespread pro-European sentiment among the Turks. After the EU hesitated to show Turkey the way to membership, the political climate changed. The Turks now feel abandoned and rejected by the EU.

The problem now is the enemy is too close. Islamic State and the radicalisation of Arab societies are forcing us to rethink the situation more seriously and to take into consideration our best interest.

Turkey will either be with us – together in the EU – or not, adrift somewhere between Russia’s interests in the north and Sunni uprising in the south.

*Theodoros Benakis is a writer and journalist.

Theodoros Benakis is a writer and journalist.