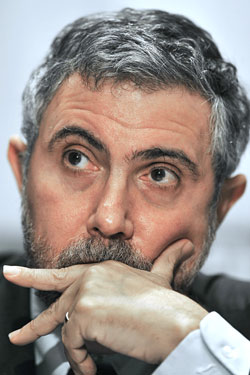 American officials used to lecture other countries about their economic failings and tell them that they needed to emulate the U.S. model. The Asian financial crisis of the late 1990s, in particular, led to a lot of self-satisfied moralizing.

Thus, in 2000, Lawrence Summers, then the Treasury secretary, declared that the keys to avoiding financial crisis were “well-capitalized and supervised banks, effective corporate governance and bankruptcy codes, and credible means of contract enforcement.” By implication, these were things the Asians lacked but we had.
We didn’t.

The accounting scandals at Enron and WorldCom dispelled the myth of effective corporate governance. These days, the idea that our banks were well capitalized and supervised sounds like a sick joke. And now the mortgage mess is making nonsense of claims that we have effective contract enforcement — in fact, the question is whether our economy is governed by any kind of rule of law.

The story so far: An epic housing bust and sustained high unemployment have led to an epidemic of default, with millions of homeowners falling behind on mortgage payments. So servicers — the companies that collect payments on behalf of mortgage owners — have been foreclosing on many mortgages, seizing many homes.

But do they actually have the right to seize these homes? Horror stories have been proliferating, like the case of the Florida man whose home was taken even though he had no mortgage. More significantly, certain players have been ignoring the law. Courts have been approving foreclosures without requiring that mortgage servicers produce appropriate documentation; instead, they have relied on affidavits asserting that the papers are in order. And these affidavits were often produced by “robo-signers,” or low-level employees who had no idea whether their assertions were true.

Now an awful truth is becoming apparent: In many cases, the documentation doesn’t exist. In the frenzy of the bubble, much home lending was undertaken by fly-by-night companies trying to generate as much volume as possible. These loans were sold off to mortgage “trusts,” which, in turn, sliced and diced them into mortgage-backed securities. The trusts were legally required to obtain and hold the mortgage notes that specified the borrowers’ obligations. But it’s now apparent that such niceties were frequently neglected. And this means that many of the foreclosures now taking place are, in fact, illegal.

This is very, very bad. For one thing, it’s a near certainty that significant numbers of borrowers are being defrauded — charged fees they don’t actually owe, declared in default when, by the terms of their loan agreements, they aren’t.
Beyond that, if trusts can’t produce proof that they actually own the mortgages against which they have been selling claims, the sponsors of these trusts will face lawsuits from investors who bought these claims — claims that are now, in many cases, worth only a small fraction of their face value.

And who are these sponsors? Major financial institutions — the same institutions supposedly rescued by government programs last year. So the mortgage mess threatens to produce another financial crisis.
What can be done?
True to form, the Obama administration’s response has been to oppose any action that might upset the banks, like a temporary moratorium on foreclosures while some of the issues are resolved. Instead, it is asking the banks, very nicely, to behave better and clean up their act. I mean, that’s worked so well in the past, right?

The response from the right is, however, even worse. Republicans in Congress are lying low, but conservative commentators like those at The Wall Street Journal’s editorial page have come out dismissing the lack of proper documents as a triviality. In effect, they’re saying that if a bank says it owns your house, we should just take its word. To me, this evokes the days when noblemen felt free to take whatever they wanted, knowing that peasants had no standing in the courts. But then, I suspect that some people regard those as the good old days.

What should be happening? The excesses of the bubble years have created a legal morass, in which property rights are ill defined because nobody has proper documentation. And where no clear property rights exist, it’s the government’s job to create them.
That won’t be easy, but there are good ideas out there. For example, the Center for American Progress has proposed giving mortgage counselors and other public entities the power to modify troubled loans directly, with their judgment standing unless appealed by the mortgage servicer. This would do a lot to clarify matters and help extract us from the morass.
One thing is for sure: What we’re doing now isn’t working. And pretending that things are O.K. won’t convince anyone.