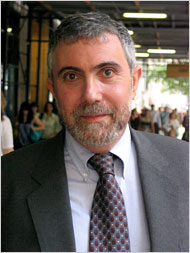 Health care reform hangs in the balance. Its fate rests with a handful of “centrist” senators — senators who claim to be mainly worried about whether the proposed legislation is fiscally responsible. But if they’re really concerned with fiscal responsibility, they shouldn’t be worried about what would happen if health reform passes. They should, instead, be worried about what would happen if it doesn’t pass. For America can’t get control of its budget without controlling health care costs — and this is our last, best chance to deal with these costs in a rational way.

Some background: Long-term fiscal projections for the United States paint a grim picture. Unless there are major policy changes, expenditure will consistently grow faster than revenue, eventually leading to a debt crisis.

What’s behind these projections? An aging population, which will raise the cost of Social Security, is part of the story. But the main driver of future deficits is the ever-rising cost of Medicare and Medicaid. If health care costs rise in the future as they have in the past, fiscal catastrophe awaits.

You might think, given this picture, that extending coverage to those who would otherwise be uninsured would exacerbate the problem. But you’d be wrong, for two reasons.

First, the uninsured in America are, on average, relatively young and healthy; covering them wouldn’t raise overall health care costs very much.

Second, the proposed health care reform links the expansion of coverage to serious cost-control measures for Medicare. Think of it as a grand bargain: coverage for (almost) everyone, tied to an effort to ensure that health care dollars are well spent.

Are we talking about real savings, or just window dressing? Well, the health care economists I respect are seriously impressed by the cost-control measures in the Senate bill, which include efforts to improve incentives for cost-effective care, the use of medical research to guide doctors toward treatments that actually work, and more. This is “the best effort anyone has made,” says Jonathan Gruber of the Massachusetts Institute of Technology. A letter signed by 23 prominent health care experts — including Mark McClellan, who headed Medicare under the Bush administration — declares that the bill’s cost-control measures “will reduce long-term deficits.”

The fact that we’re seeing the first really serious attempt to control health care costs as part of a bill that tries to cover the uninsured seems to confirm what would-be reformers have been saying for years: The path to cost control runs through universality. We can only tackle out-of-control costs as part of a deal that also provides Americans with the security of guaranteed health care.

That observation in itself should make anyone concerned with fiscal responsibility support this reform. Over the next decade, the Congressional Budget Office has concluded, the proposed legislation would reduce, not increase, the budget deficit. And by giving us a chance, finally, to rein in the ever-growing spending of Medicare, it would greatly improve our long-run fiscal prospects.

But there’s another reason failure to pass reform would be devastating — namely, the nature of the opposition.

The Republican campaign against health care reform has rested in part on the traditional arguments, arguments that go back to the days when Ronald Reagan was trying to scare Americans into opposing Medicare — denunciations of “socialized medicine,” claims that universal health coverage is the road to tyranny, etc.

But in the closing rounds of the health care fight, the G.O.P. has focused more and more on an effort to demonize cost-control efforts. The Senate bill would impose “draconian cuts” on Medicare, says Senator John McCain, who proposed much deeper cuts just last year as part of his presidential campaign. “If you’re a senior and you’re on Medicare, you better be afraid of this bill,” says Senator Tom Coburn.

If these tactics work, and health reform fails, think of the message this would convey: It would signal that any effort to deal with the biggest budget problem we face will be successfully played by political opponents as an attack on older Americans. It would be a long time before anyone was willing to take on the challenge again; remember that after the failure of the Clinton effort, it was 16 years before the next try at health reform.

That’s why anyone who is truly concerned about fiscal policy should be anxious to see health reform succeed. If it fails, the demagogues will have won, and we probably won’t deal with our biggest fiscal problem until we’re forced into action by a nasty debt crisis.

So to the centrists still sitting on the fence over health reform: If you care about fiscal responsibility, you better be afraid of what will happen if reform fails.