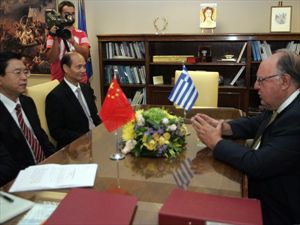 All economic data are best viewed as a peculiarly boring genre of science fiction, but Chinese data are even more fictional than most. Add a secretive government, a controlled press, and the sheer size of the country, and it’s harder to figure out what’s really happening in China than it is in any other major economy.

Yet the signs are now unmistakable: China is in big trouble. We’re not talking about some minor setback along the way, but something more fundamental. The country’s whole way of doing business, the economic system that has driven three decades of incredible growth, has reached its limits. You could say that the Chinese model is about to hit its Great Wall, and the only question now is just how bad the crash will be.
Start with the data, unreliable as they may be. What immediately jumps out at you when you compare China with almost any other economy, aside from its rapid growth, is the lopsided balance between consumption and investment. All successful economies devote part of their current income to investment rather than consumption, so as to expand their future ability to consume. China, however, seems to invest only to expand its future ability to invest even more. America, admittedly on the high side, devotes 70 percent of its gross domestic product to consumption; for China, the number is only half that high, while almost half of G.D.P. is invested.
How is that even possible? What keeps consumption so low, and how have the Chinese been able to invest so much without (until now) running into sharply diminishing returns? The answers are the subject of intense controversy. The story that makes the most sense to me, however, rests on an old insight by the economist W. Arthur Lewis, who argued that countries in the early stages of economic development typically have a small modern sector alongside a large traditional sector containing huge amounts of “surplus labor” — underemployed peasants making at best a marginal contribution to overall economic output.
The existence of this surplus labor, in turn, has two effects. First, for a while such countries can invest heavily in new factories, construction, and so on without running into diminishing returns, because they can keep drawing in new labor from the countryside. Second, competition from this reserve army of surplus labor keeps wages low even as the economy grows richer. Indeed, the main thing holding down Chinese consumption seems to be that Chinese families never see much of the income being generated by the country’s economic growth. Some of that income flows to a politically connected elite; but much of it simply stays bottled up in businesses, many of them state-owned enterprises.
It’s all very peculiar by our standards, but it worked for several decades. Now, however, China has hit the “Lewis point” — to put it crudely, it’s running out of surplus peasants.
That should be a good thing. Wages are rising; finally, ordinary Chinese are starting to share in the fruits of growth. But it also means that the Chinese economy is suddenly faced with the need for drastic “rebalancing” — the jargon phrase of the moment. Investment is now running into sharply diminishing returns and is going to drop drastically no matter what the government does; consumer spending must rise dramatically to take its place. The question is whether this can happen fast enough to avoid a nasty slump.
And the answer, increasingly, seems to be no. The need for rebalancing has been obvious for years, but China just kept putting off the necessary changes, instead boosting the economy by keeping the currency undervalued and flooding it with cheap credit. (Since someone is going to raise this issue: no, this bears very little resemblance to the Federal Reserve’s policies here.) These measures postponed the day of reckoning, but also ensured that this day would be even harder when it finally came. And now it has arrived.
How big a deal is this for the rest of us? At market values — which is what matters for the global outlook — China’s economy is still only modestly bigger than Japan’s; it’s around half the size of either the U.S. or the European Union. So it’s big but not huge, and, in ordinary times, the world could probably take China’s troubles in stride.
Unfortunately, these aren’t ordinary times: China is hitting its Lewis point at the same time that Western economies are going through their “Minsky moment,” the point when overextended private borrowers all try to pull back at the same time, and in so doing provoke a general slump. China’s new woes are the last thing the rest of us needed.
No doubt many readers are feeling some intellectual whiplash. Just the other day we were afraid of the Chinese. Now we’re afraid for them. But our situation has not improved.